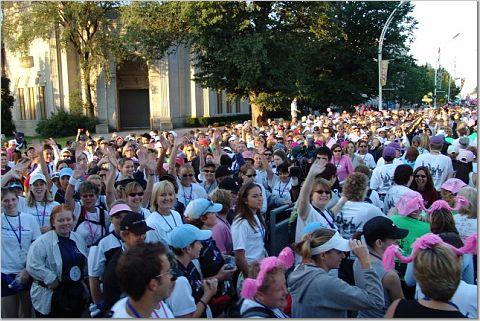 I am not a runner. Saw a t-shirt once that summed it up for me...

running you should run too

because something is probably chasing me.”

And yet, yesterday I burst into tears for the sheer joy of running.

It was Race weekend in Ottawa. More than 48 000 people registered to run the 5k, 10k, half and full marathon. It was a beautiful sunny sky, and I was walking with a friend to dance rehearsal when I looked across the canal at a long steady stream of runners. I was stunned. 13000 people. That is a lot of people running. A lot of people coming together in unison. I gawked as I saw the long, steady stream of runners grace the side of the canal. Even in tempo, the sheer volume of energy causes me to stop several times, to exclaim to Lorrie “look at that!”, and to register that this was phenomenal. It made me think of the Great Migration I saw in Africa. Unified movement.

Unified in hope, grit and effort. I can’t really confess to understanding their motivation to do it. A marathon is LONG! And judging by the wobbly legs and the red cheeks and the slightly glazed eyes, it comes with considerable effort.

But there they are. I am compelled by the simplicity of it all. In the end, it comes to putting one foot in front of the other. Cramps, dehydration, blisters, self-talk aside, it comes down to maintaining forward momentum at whatever speed you can manage. One foot in front of the other, when joined with tens of thousands of others becomes a herd, a flock, a legion, a force.

If there were tens of thousands running, there were hundreds of thousands standing on the sidelines cheering, cowbelling, noise-making. As the marathon runners turned the corner that marked their last 5K, the cheers made me think of Will Pharell’s most catchy line “clap along if you feel that happiness is the truth” and the sound just escalated. Everyone is in it for the runners. Those of us standing on the side of the route are willing them forward… our faces are lit up, our cheers are loud and forceful and…yes, tears are welling up.

Records were set, and dreams were dashed. I leave inspired. Perhaps people run to remind themselves of what we all need to remember – we live in community, we win in community, all of us play a part in getting to the finish line and in the end, it is always, quite simply, about putting one foot in front of the other.

Being a runner and training for my 8th half marathon I have to say it's you, the spectator, the cheerleader, the cow bell ringer and all the police officers directing traffic so us runners can slog across the intersections--- it's all that and then some that make all that pain and exhaustion oh! so worth it. you guys are truly the best, and i always get choked up when that starting gun goes off and the herd of runners around me serge across the starting line. community, both from fellow runners and family, friends and strangers, is the reason i sign up for races. what a wonderful post, thank you!

Katie, I am so glad to know that my treaty cheers are felt through the crowds! You keep on running, 8 halfs is AMAZING! And I'll keep up the cheering section. I am in Iceland on holiday this week, and guess what?? It was Race Day the first day here!!! You know I was on the sidelines cheering them all in! Tania

Yes, I am so inspired by the "disabled" participants - in wheelchairs, with artificial limbs, blind, I am so humbledvby their courage and strength.

yes, it is most inspiring when we come all together in such a diverse community, in pursuit of one goal.

You have to develop into acquainted with Nike free run all the info which the owners take advantage of selling their goods.