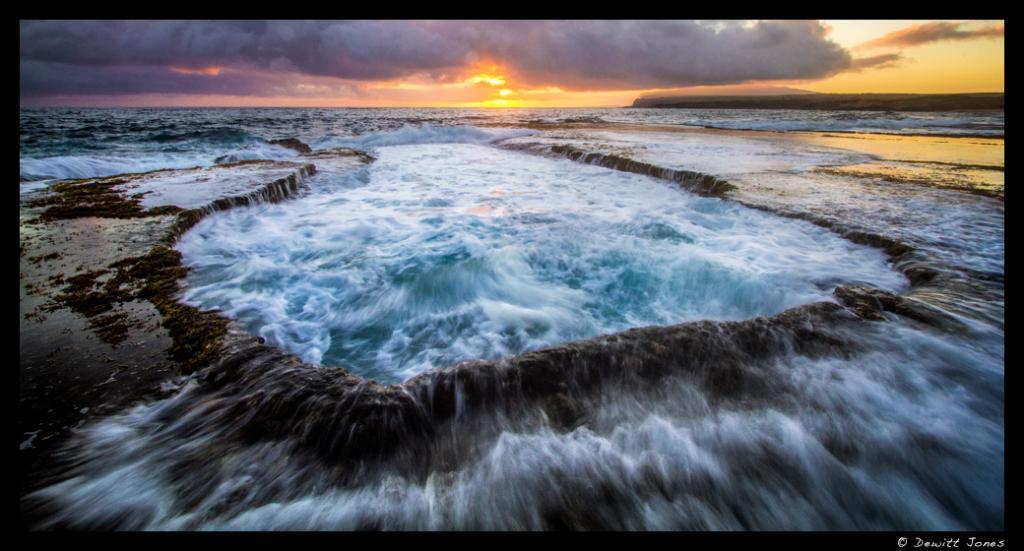 Stars were still hanging in the dark sky as I pulled my gear from the back of the car and headed off toward the edge of the sea. Dawn at Mo`omomi Beach on Molokai is one of the great wonders of the world and I didn’t want to be late. As I worked my way across the slabs of sandstone toward one of my favorite viewing spots, I realized that something was amiss,. The water just wasn’t where it was supposed to be. Even in the near darkness, it was clear that this morning the sun would dawn on a super low tide. “I’m taking a chance on the Bathtub,” I murmured to myself.

The Bathtub is a large blowhole at the far end of a rock ledge jutting far out to sea. At normal or high tide, one is taking his life in his hands to venture to its edge. Twisted a`a lava tries to grab you every step of the way and a single sneaker wave will not only soak your cameras but will slam you down against those razor rocks. More than enough to ruin your day.

On this particular morning, however, both the wind and the waves were calm. So, keeping an eye on what waves there were, I worked my way slowly out to the blowhole and set up my tripod. Then I just stopped and stared.

The water coming into the bathtub was a mixture of turquoise and froth. It joyously filled up the rock cavern and flowed out over the ledge and over my feet. Then, gently, it retreated only to repeat the process with each incoming wave.

I thought about all the natural cycles I had witnessed while photographing - the seasons, the rising and setting of the sun, the tides. How many thousands of times I had I watched them? Like watching the smooth muscle of the planet -- the things our little orb can’t help but do. Like watching the earth breathe.

Well, the in-breath here at the bathtub was breathtaking. Certainly, it was visually stunning but there was an energetic that made it even more beautiful. My heart quickened every time the tub filled. No, every time it overflowed. That was what was so powerful - watching something overflow. Something that had been filling up from the inside.

Thank you DeWitt. Wonderful thought, great image & even better description of the life process. We missed you at the Hui in late October.

I sure wanted to be there but we had a trip planned to Zion and Bryce. Will try and make it next year. Thanks for the kind words!

Dewitt: My photos at the bathtub are some of my most cherished! One of my favorite places anywhere. I have them in almost every lecture that I do. This is a nice example and the commentary brings back memories.

Thanks, George! Come back, come back! Let's go do it again!

That's a great story Dewitt, and a beautiful photograph. An excellent example of the benefit of returning to a familiar place and understanding the nuances.

Thanks, Tom, for your very kind words!

This is a fantastic story and illustration of Celebrate What's Right. It reminds me of a talk you once did where you asked the people in the audience to write down the things in their life that "Filled Their Cup". That idea has stuck with me ever since I first heard it!