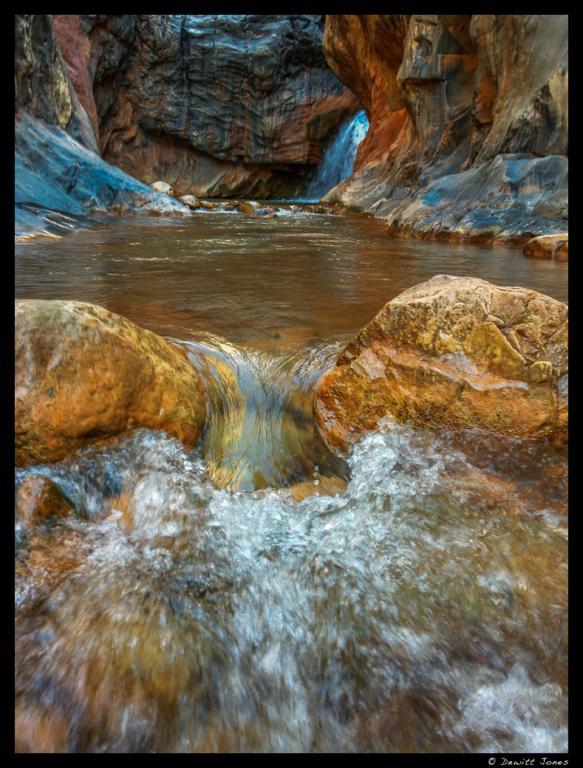 Sometimes you have to let go of your fear before you can really celebrate life. Case in point -

"You know, Dewitt, I've never really spent a night outdoors before. Oh, once when I was ten I camped out in a vacant lot across the street from my house. But that's it."

He told me on the first evening as he and 17 other participants packed their gear for a two week seminar running the Colorado River through the Grand Canyon.

I didn't want to hear it.

"My God, then why did you choose this seminar?!" I thought. But he was already answering my question.

"I wouldn't have come if my wife and I didn't love photography so much. She's the outdoorsey one, but as I've always told her, 'It took men 50,000 years to come out of the caves and I'm none too anxious to return to them!'"

I worried as I fell asleep that evening, "Not one night out of doors! Hey, once you start on the river, there's no turning back. I hope he's ready."

As I lay there, I thought back over all the places my photography had taken me. How many times had it forced me to do things I would have otherwise shrunk from -- floating on an iceberg in Alaska; meeting the man who raised the largest cabbages in Del Norte County; living for several days on one of Yosemite's sheer granite walls.  How many times I'd just gone out to photograph and come back with an experience that shaped my life.

I remembered that it was photography that first brought me to the Southwest. "We want you to do a story on the Kaiparowitz Plateau," the Geographic had told me. It sounded like a story on a New York delicatessen.  I would soon learn otherwise. Within days I found myself camped in country that was totally foreign to me - few trees, little water, and layer upon layer of rose colored sandstone.

Until then I had only the dimmest sense of geologic time. I had grown up in the Midwest - the land of deciduous trees.The landscape seemed only as old as its green covering - a few hundred years at most. The annual cycle of the seasons reinforced my reckoning of time in years rather than millennia.

The Southwest changed all that. I wandered through Zion, Bryce, Arches and Canyonlands, constantly staring at rock patterns millions of years old. Uncovered, in-my-face, all-the-time. Again and again, I'd be drawn to a scene for its pattern and composition and then be jolted by the realization of the immensity of what I was looking at.

Never had time seemed so vast, so beautiful.....or so scary. Against immeasurable time, I felt paltry, petty, insignificant, and inconsequential. It was not a pleasant feeling.

I remembered the evening when that feeling shifted. I was sitting beneath Skyline Arch waiting for just the right light for my photograph, when time sneaked up and overwhelmed me. Infinity stretched out before and behind me and I literally shut my eyes for a moment to try and keep from looking at it. But photographers are born to look, I guess , and the longer I stared into that landscape the more my feelings of dread turned to those of peace.

What was shifting was my own place in the scheme of things. With both my heart and my head, I had begun to accept my own insignificance. As I did, that nagging human-centered responsibility for the world's fate slipped from my shoulders. The world would go on regardless of me, regardless of man, regardless. The immensity of time put it all in a new perspective - the perspective of insignificance. Man was no longer the center of the universe.. He would do what he would do in his time here. The world would go on and on and on. That realization was both humbling and freeing at the same time - and within that realization was great peace. It was a gift from the canyons and a gift from my photography which brought me there.

"Don't worry," I thought as I lay there in bed before the river trip, "Of course he's ready."

The Grand Canyon is a metaphorical landscape. A trip by river through its heart offers a chance to float effortlessly deeper and deeper into both time and oneself; to truly 'go with the flow'. I watched the Canyon work it's magic on my citified friend; saw his fears of camping fall away; watched his growing appreciation for the impact of this environment on the human spirit.

On the third day we spent the afternoon at Shinumo Creek. The creek is magic - fairy castle walls of sculptured sandstone which culminate in a sparkling bathtub-temperature plunge pool fed by a waterfall. There is a cave behind the falls and, with a little clambering, you can position yourself for a dive through the falls into the pool. Everyone was there, photographing and swimming. Time wasn't immense, it was absolutely immediate and it had transformed a group of adults into rollicking, celebrating children.

I saw my friend sitting beside the stream staring at the scene before him - his face wreathed in smiles, his heart full of laughter, his eyes full of light. "God!" I thought, "If it hadn't been for his love of photography, he might never have come!"

I leaned over and touched his shoulder, "Now you know why it took those men so long to come out of the caves!"

Thank you, Dewitt, for these deep words and spiritual explorations. "Born to Look" and "The Impact of this environment on the human spirit" definitely resonate with me. If we can not stand in awe before nature's magnificent beauty anywhere in the world, we were not meant to leave the cave and take in the creation of life and magic every day brings. Thank you for making my morning!

You are more than welcome, my friend. I can see you there standing in awe before nature's beauty.

Wow, this is one of my favorites, Dewitt! Thank you for your love of photography AND storysharing. When I first picked up a camera, I was hesitant, concerned that it might distance me from life. Just the opposite! All my senses are more alert, more receptive to life. My presence and intimacy with the moment far greater than it was 10 years ago And yes, my passion to receive and share life's beauty through photography is constantly stretching me beyond my edges ... beyond my fears, perceptions and preconceptions. In all areas of my life, without the pull of love, I would still be in the cave ; )

Ah, and then there is your "Gift from the Canyons". Profound, wise ... and a timely reminder, my dear friend!

Ah, yes, just the opposite. It does draw us closer into that felling of love. Couldn't agree more!

Beautiful image and words. You expressed my feelings exactly. Thank you and Happy Holidays!

And thank you, Barry.

Dewitt you are one of a handful of photographers I would love to meet in person. Your photographs and your words touch me deeply. Love the colors in this particular photo. Your story has the feel of all of us sitting around a campfire out in the middle of nowhere and hanging on every word you speak. Simply put: I never would believe that a professional photographer for National Georgraphic could be so open, so sincere, so able to touch the human heart with your gift of vision and stories. Thank you! Merry Christmas.

Lynn, thank you for your very kind words. It would be a delight to meet sometime. Come to Molokai and take one of the classes I help teach here. And, it that's not to be, then just keep celebrating!

Exactly what I feel when out in the "wilds" away from all the man-made ruckus.So beautifully expressed. Thank you.

Thank you, Carol. I'm not surprised we feel the sam way!