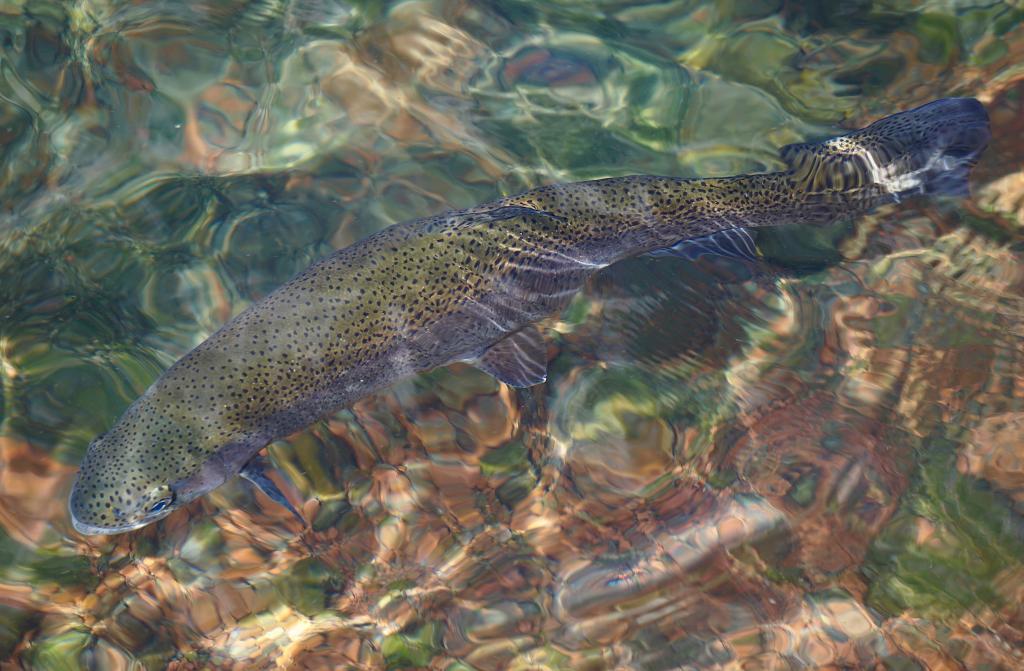 Alongside the banks of Oregon’s wild and scenic Metolius River, I watch trout in the shallows, but think of salmon in the rapids. One life connects to another, to another, to mine, to yours. We’re all alive in greater currents that start flowing somewhere we might sense but never see.

These river currents I’m currently beside have flowed steadily for far longer than I’ve been alive. The steadiness of the Metolius is remarkable even on the scale of rivers: its headwaters appear, fully formed and rushing, from the exit of a lava tube deep underneath some of Central Oregon’s most rugged, majestic volcanic mountains. Formed from glacial snow melt and held back by the lava tube, the Metolius doesn’t rise or fall according to recent rain as most rivers do. It never freezes in winter; but it’s icy even in the hottest stretch of summer. It remains essentially pure in the midst of tainted times. It’s the steadiest river I’ve ever met, yet also the most relentless. I find it exceptionally serene.

How can the most peaceful place also be the most relentless one? I wonder this as I set up camp alongside the river, grateful to have one sweet night alone next to it. It feels like it’s taken me as long as the waters to get here, for this one moment now quickly rushing by. I’ve wanted to camp in this one particular spot for years, out on the point of a river bend, where the river will rush by my tent on three sides, singing harmony to my sleep all night. It’s taken me months to get a camping break at all: my recent challenges in caregiving my 93-year-old mother have been exacerbated by an unprecedented snowstorm, catastrophic tree fall, a hundred-year flood, and evacuation from a wildfire within a mile of our forest home. It feels like I’ve been swimming upstream forever to get here. Yet I’m here now, and all the effort to reach these banks for one restorative night makes me celebrate my temporary presence here that much more deeply. My own senses are heightened, my gratitude deepened, for the sheer miracle of continued existence. Whatever happens from here, I will always have made it here for this one night.

I immerse my senses in the unceasing rush of the river, feeling the slow movement of the rocks underneath its surface. They’re beyond my sight, and beyond resistance to the pull and grind of the waters. They’re inarguably real despite my inability to see them, just as the sources of the currents are. There is a solid basis for my faith in their existence.

The river rocks never have to swim back upstream, I notice. Wouldn’t it be nicer for the fish and for us, if we never had to swim upstream either? What if as our lives moved towards conclusion, we could just relax into the currents carrying us down towards the greater sea, instead of struggling so hard to reach back to the beginning? That seems on the surface to be a way I might wish for, if I squandered time wishing for things that never will be.

Then the river’s voice reminds me: the most peaceful place is also the most relentless one. It’s here where the current is ceaseless where I feel the most calm. Peace isn’t quiet, I notice. It’s here where it’s never quiet that I feel the most ease. I think of times of love and laughter that have felt the same, neither silent, and never effortless. I think of the joy of disciplined work too. I think of all the currents I’ve struggled against in this lifetime, within me and beyond me, and know my strength and fulfillment of purpose has come from within that struggle. I have to celebrate those currents, be grateful for them, and keep swimming to reach back to source for my final arrival before rest. That’s what life pares down to now, as I age.

I felt that fundamental turn back towards source, towards the long upstream journey home, happen in my life sometime clearly but subtly in recent years. The imperative to fulfill purpose despite opposing currents and conflicts became as instinctive and beyond resistance as the river rocks. It requires vast efforts of upstream swimming to give all I’ve come to give—not for myself but for others to come—before touching source and passing. Yet the exertion also eases hurts, releases fears, allows me to absorb scars and keep on. It allows me to celebrate the upstream swimming instead of wishing anything was otherwise.

In the end, we swim in many currents at once, in differing directions and forms. Some do carry us downstream, even as others newly appear for us to swim against. It’s easy to only notice the currents we’re swimming against, for the ones that carry us along at their rate seem to not move beside us at all. They’re easy to take for granted, when we move effortlessly and exactly as they do. So I celebrate the currents I’m in that I can’t notice; and again the ones that make me strong via the ways in which I must overcome them. We’re forever swimming upstream, as compelled as aging salmon. That’s as perfect and steady as the untamed river beside which I sleep blissfully for this one night—a night it was well worth it to wait years to feel.