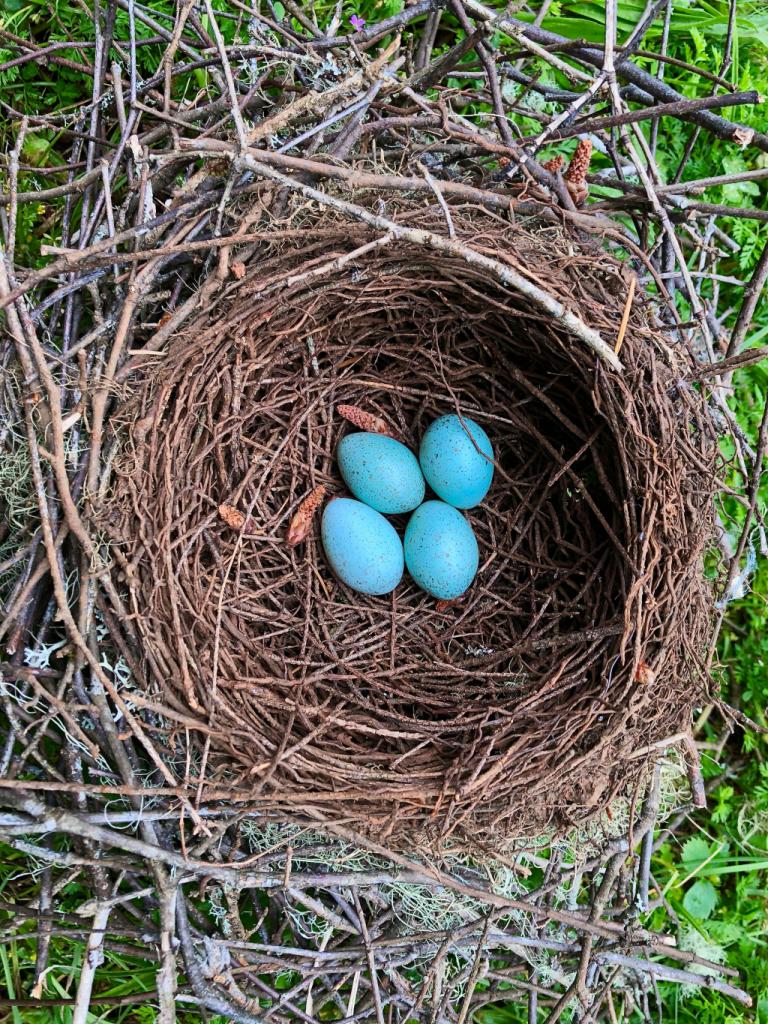 Local blue jays have discovered a forest nesting site they love: under our deck, on top of the floodlights by our basement door. It isn’t what we thought the lights were for, but I celebrate creative survival. Imagination is a great inventor. Repurposing is a beautiful art form.

I watch for the jays’ annual arrival. It’s hardly stealthy, given their raucous voices. While constructing their nest, though, they’re constantly cautious. They always pause on tree branches, making sure it’s safe, before flying in with twigs in their beaks. Instinct renders blueprints unneeded, as they build their small architectural marvels. Larger twigs at the base, somehow placed on the lights stably enough to build upon until nesting structure develops. Out of nearly straight twigs a graceful inner circle begins to form. The central nesting material is smaller and softer, until at last the nest becomes a perfect cradle in which to birth another generation. Four eggs seems to be the right round number. Mama jay begins to sit on them with a motionless patience I’ll never attain.

Blue jays have no understanding of basement doors, alas. I can’t explain to them that I need to get the brush mower out, to keep blackberries, grasses and poison oak at bay. If I move slowly and quietly, mama jay will see me coming and take off, flustered but not panicked. The opening door barely clears the nest and lights. But once last year my mind was elsewhere, and I forgot my care. I moved too quickly and loudly, and mama jay flew out with such haste that she knocked one of her eggs out of the nest. It fell and broke at my feet. I felt a primal despair. I had cost the lives of one of her children with my inattentiveness. She continued to hatch the other three without expressing distress. Survival is not taken for granted in the wild, I suppose. Ours is never assured either.

I was more careful this year. The jays arrived, the nest formed, eggs were laid. One day, though, mama jay was not there, too soon for her young to have hatched and flown. I kept checking every day, touching nothing. Finally in June, I took the nest down. Four pale blue eggs still there, their embryos never to be born. Again, primal sadness; yet also an honor, to have been the one to witness mama jay’s life and disappearance. It was not so different than watching my own mother’s flight and passing.

How silent and unnoticed lives and their passings are, in nature. No certificates of birth or death for the birds. No historical record of their individual existence. Their beautiful, vital lives come and go without remark, no less beautiful for their anonymity. Birds’ descendants do not stagger under the weight of paperwork. Life remains primal and simple.

Placing the nest and its unhatched eggs on the ground felt like placing an offering on an altar. It became a prayer of humility and surrender, as I realized how many of our lives and plans are like those unhatched eggs. A percentage must fail, for the greater weave of nature to remain in balance. Whatever life’s basis and origins, it’s not centered on us.

The fragility of our future concerns me. But when I lean into the prayer of humility and surrender, I’m grateful. I celebrate that our survival isn’t needed for the world to thrive. I look at the brilliant night stars and celebrate that even the earth’s survival isn’t needed for the universe to continue birthing infinite aliveness, for eons to come. Planets too are only eggs. There are likely billions of them out there, each unique. I take comfort in the infinite hatching.

Back at my basement door one morning, I notice that the four unhatched eggs are gone. They’ve become a meal for another creature; the unborn have still fed the future. I’m reminded that even our unhatched plans may serve the lives of others. They often serve our own lives too: so many times they lead to us to what is better yet unimaginable. Humility, surrender and gratitude surround me once more, as I enter the basement and pull out the brush mower again.

As I mow, robins follow in my wake, finding easy meals in the newly mown earth. A swallowtail lands on the mower handle, tasting my sweat. Another unplanned day hatches from an egg-blue sky.

Thank you for this celebration.  Nests sit atop both of the light fixtures in our woodshed.  They have been occupied each year since we built the shed, about twenty years ago.  I am not the ornathologist that you seem to be, for I am unsure what birds built and use these nests.

So grateful to find this blog post today. your thoughts warmed my heart with a new perspective. thank you for sharing your experiences & ideas. I am blessed, Deb B.

A wonderful, thoughtful story.  Thank you for the reminders.

I am grateful and delighted with this read.

I always come away with a wonderful life-lesson from each of your marvelous blogs, Eric.  This one really touched me deeply as I join so many of the World with concerns about what lies ahead and our ability to "survive".  I was really struck by your words "Survival is not taken for granted in the wild, I suppose. Ours is never assured either." and the correlation to our current situation.  So many "unhatched plans" waiting patiently to see what manifests.  Many thank and blessings to you, Eric - as always.