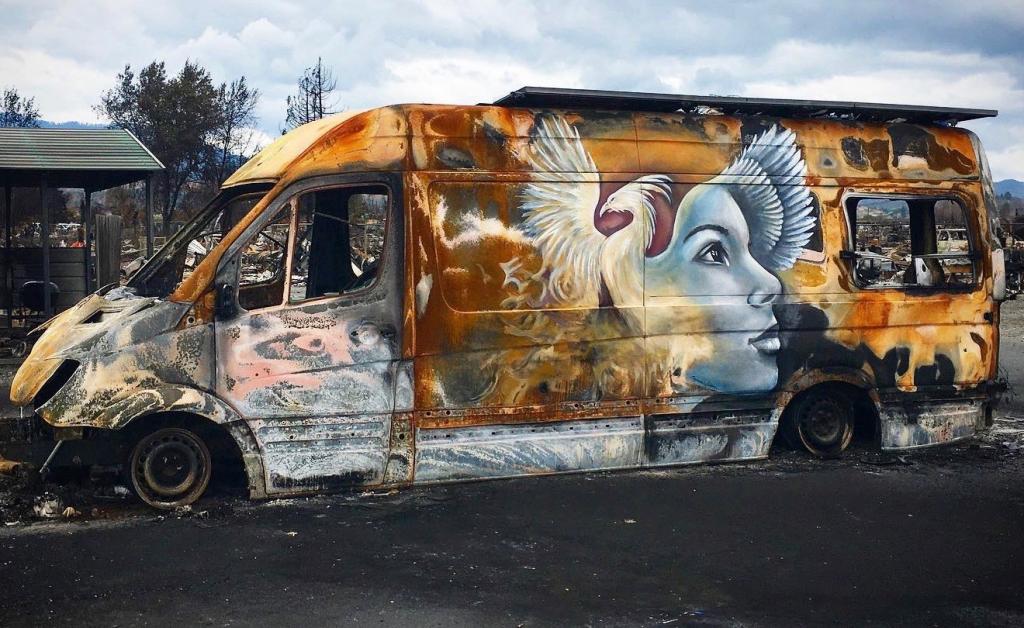 Another simple day where presence is precious. Mike and I can tomatoes, make applesauce, and stare with wonder at the deep, persistent beauty of the McKenzie River as it rushes by his cabin, while waiting for our next canning step. With quiet awe, we appreciate the grace of the river that never ceases. We appreciate the moment of friendship too; the taste of fresh warm Gravenstein applesauce, before it’s even cooled or canned. It’s a healthy, nurturing day of food and friendship. It’s the kind of day that centers celebration of the daily riches of being alive.

We do not know then that it will be our last shared day in that sacred place.

On the Monday after that, I seek solace from the challenges of my mother’s passing, and from the additional challenges of a turbulent world. I take a little-known logging road that snakes over the mountains in rural areas east, ending up at the equally majestic Umpqua River. It’s a good one-lane road, mostly paved; but there are no signs at critical junctions. It takes local knowledge and practice to get through. I see only one other moving car along the entire route, before I emerge onto the two-lane highway at the other end, then quickly off of it again to the trailhead I’ve come to visit. In the warm buzzing heat of September, there is no one on the trail but me. Someone has been here recently, though, for the simple graffiti that adorns the river foot bridges is fresh. BLESSED, it says, in a few different places. I rarely photograph graffiti, and almost never celebrate its presence. This time it speaks to me, though, and I capture the moment of my shadow falling upon the blessing. Again I feel awe at the river’s quiet persistence. I choose another route home, following that river’s banks as it flows downhill, through some of the west’s greater scenes. It has taken eons for these canyons to be carved just so; for my ancestors to evolve eyes to pass on to me, that I might for one moment see.

Again I do not yet know that the very next day, firestorms will trace the same route.

The firestorms are unprecedented but not unpredicted. They’re not even surprising. Each year the dangers have grown more fierce, and throughout what had been a mellow fire summer early on, we always appended the key phrase “so far” to any mention of that. We know we cannot take summer survival for granted any longer.

Smoke plumes are more effective warnings than other emergency notifications. Winds and heat combine to become combustible and volatile, and Tuesday there is a vast plume to the north of my home, then another one to the south, then one smaller but even closer. I do not need any bulletins to give me instructions, but since the power is already out and I live out of cell phone range, I won’t be receiving any anyway. I pack the absolute essentials and evacuate in minutes, just as we did last year, when my mother was still here to live through a nearby fire with me.

As smoke and ash settle in and cover the west, daylight dims to dusk light, even where flames don’t reach. There are too many fires and stories of sacred places burning to even track. The McKenzie River corridor is devastated, the Umpqua River corridor too. A significant percentage of the dwellings in the Southern Oregon towns where I lived for seventeen years are quickly ash, in an urban fire that never even reaches the forest. To the north, our sacred retreat of Breitenbush Hot Springs is half gone as well. That barely begins the list. So many lives are affected that I can’t begin to know or name. I can’t get to the next local places I was slated to visit, across burning highways. Plans are ash too. Beyond the smoke plumes I see, hundreds of fires rage at once in the west. As the inevitable stories of human kindness, heroic action and compassion also begin to burgeon, I too wish to do my selfless part for the fire refugees less fortunate than me. What I can do, though, is so small as to vanish in the unbreathable smoke.

I still have no power, no phone, no way to cook, no way for anyone to even reach me when I’m in the woods at home. Our well water will hold out as long as the storage tank’s reserves and our generators do. I’m already used to wearing masks, albeit of a different sort. We keep watch for opportunistic looters. We wonder what that volley of shotgun blasts is, early one morning nearby. (Do people really hunt geese when the smoke visibility is only a few hundred yards?) There’s an ice shortage, as we all scramble to save our cold food without electricity. I can’t find any, and my food goes bad. Sleep is as hard to come by as ice.

Yet I’m still standing, as are most. What is accomplished in emergency in saving lives and forests is more remarkable than what’s lost. Fire is not an intruder, but an indigenous resident. Its new intensity is a messenger of our own imbalance; our misunderstanding and mistreatment of our own earthly home. Fire is wisdom to be listened to, as much as any other voice of spirit.

Among the homes threatened in the McKenzie River inferno is that of nature writer Barry Lopez, who has lived there for half a century. A few years back, I asked him what he had learned from the river after many decades of living along its banks, listening to water’s spirit too.

“Just keep going,” he said, and with that his answer was complete.

So the rivers and the rest of us keep going, with that preciousness of presence once more. Mike’s first step of rebuilding from the ashes of his cabin is to buy new canning supplies and again make applesauce and can tomatoes. In the ruins near my old Southern Oregon home, an artist takes his airbrush to a burned van in the aptly named town of Phoenix, making art from torched metal. In all places of crisis, we reach out to those around us, seeking to find the links between our remaining gifts and others’ new needs. We find beauty in every trace of survival, and remember how fertile ash becomes in the soil. We make gratitude from the dawn of the new day, in reflection of the miracle of still being alive.

I hope you are able to stay safe and keep writing. You’ve no idea how many lives you touch with your words, how many people see in a new way because of reading your blog, or how many people are uplifted by a new (to them) thought about life that you’ve expressed. Thank you for sharing your life with all of us in the Celebrate family.

Eric, heartbreaking and beautiful. The challenges of this year in particular have been and continue to be so hard.  Yet, we do and will keep going.  Thank you.

Love your vision, Eric, and your writing.

After reading your blog about your Mother earlier, I feel that I've lost a friend. I miss her too.

When Black congregations hear something they like from their preacher they say, "Keep on."

That's what I say too.

We live in a mountain community in California and have had to evacuate a few times - coming back to see homes in our community destroyed.  I feel so sorry for your dear friend and his loss, yet I love his dedication to "start over".  Your blog was very powerful and touched me deeply.  This year is worse than most and the fire season isn't over.  Stay safe, my friend.