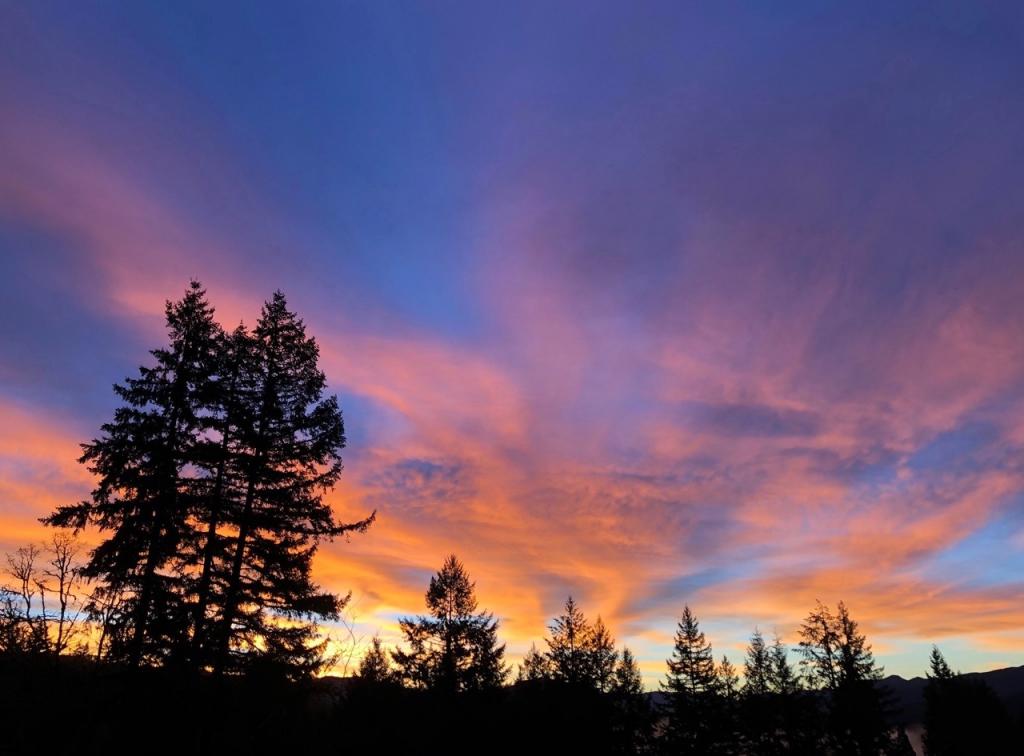 My mother and I agreed on our favorite tree. From the porches of our adjacent dwellings, the magnificent ancient fir towered above us. It was certainly older than me, perhaps even her. For almost a century, its limbs grew graceful and majestic. I was inspired by its resolute strength in standing still yet constantly growing. We watched it dance in every wind, concerned sometimes that it might fall in a gale. After all, its younger sibling did so long ago, grazing the house in a storm. After more decades of growth, a fall now could do catastrophic damage.

The tree never fell, but a colossal snowstorm two years ago broke many of its limbs. Twenty broken “widowmaker” branches dangled far off the ground, each capable of falling with enough force to earn the lethal nickname. Given the changing climate, the harder drier ground was also taking its toll on the tree. It began to produce massive numbers of cones—urgently seeding a new generation, a precursor to its passing. On some level needing no mind, aging trees know when their return to the earth is imminent. We often know too. We all get old.

My mother and I reluctantly agreed that it was time for the tree to go. But the world’s wildness changed our priorities, and over a year later, the tree still stood when she passed away. Seven more months passed after that, as other priorities again took precedent. I was glad to have a little more time with the tree, even in its diminished state. Closure with loved ones is vital. Of that, I was acutely aware.

I prepared for sadness at making the cut, for I feel an equality of being with trees and other living creatures. To be human is not to be better, or to have more life. It’s hard for me to knowingly cut a life short, even if it’s a broken tree, even if for the greater good.

One Sunday, it was finally time. Crew expertise was available on short notice, the weather was good. After all the waiting, that tree and two other storm-damaged ones would be brought down now. I thought of how my mother would react, were she still here to witness. I knew she’d keep her sadness quiet. Instead she’d focus on her fascination with the process. She’d stand on the deck, camera in hand, and document every moment of the fall. I decided that as her eternal caregiver, that role fell to me. I picked up my camera and stood at a safe distance, in awe at the precision of the tree feller’s ability to drop the damaged trees within inches of the intended angle. Precision was essential, as even a slight mistake would crush the deck on one side of the house. Shutter clicked, trees fell as aimed, a century of growth was over. I was reminded of mercifully putting ancient suffering animals to sleep. I was reminded of my own mother’s passing. The ground and I shuddered at taking the forceful weight.

Yet sadness never arrived. As stillness returned, a flood of new light streamed through the clean sky where broken branches had been. I could see distant mountains with a clarity I’d never thought possible. The amount of December light streaming into my living room instantly increased—a precious jewel in winter. Light in the dark months takes other sadness away.

Individual beauty is temporary, and must fall away to make room for new beauty to exist. Even the tree knew that, as it did its best before leaving to generate enough cones to seed the next. The tree did not complain or feel sadness in any human way. I didn’t feel sadness either, to my own surprise. I only felt relief, wonder at the new light, and the reminder that it’s often impossible to conceive of what beauty will open up in the space beyond sadness.

In the morning I was up before dawn as usual. As the horizon light began to gather, I watched in wonder at the color that formed in the space where the tree had once been. I was greeted with an exceptional sunrise. No one else looking at the colors would ever even know that a tree had once stood there. They would only see the beauty, celebrate it, and remark upon the perfect way of the world. Beauty is not selfish, I thought to myself, as I went on to serve the day. Even roots are fleeting. I have many cones yet to produce myself, before I also soon go.