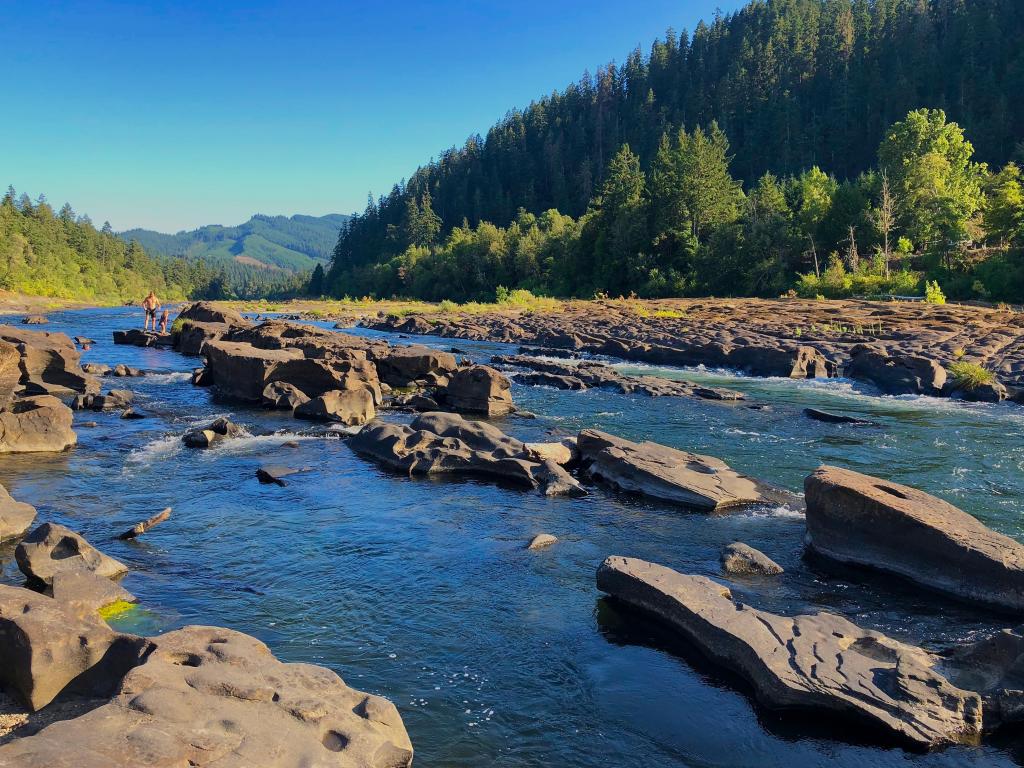 Summer heat is an evolving animal. In Oregon, we used to celebrate July 4th by declaring our independence from the drizzle that annually lasted until then. Now, we entrench our fire perimeters, pack our “go bags,” and warily scan the horizon for sudden smoke. It is inarguably different. The vast swaths of drying, dying fir trees affirm our perceptions of burning change.

The rivers persist, however. They may be lower than they once were. They’re certainly lower than we would wish them to be, in the midst of another firecracker summer, fuse lit. Yet the great rivers go on, as they’ve done without pause since a time too ancient to identify. An astonishing amount of water still flows through them, every second of every day and night. Their currents remain fierce and tireless, more than any human warrior will ever be.

We instinctively head for their liquid oases when our essential work is done. I’m especially drawn to the refuge of the Umpqua River, as it snakes its way to the sea south of me. The sandstone sculptures it has carved over millennia reveal themselves when flow recedes. They’re masterfully artful and smooth. The water channels between them are varied and artful too. The water runs clear over the smooth stone in summer.

The river is to be respected. Even in summer the central currents can sweep the unwary away. Yet there are places for the careful to find, just far enough into the river’s rush, where you can sit on a submerged smooth stone, and have the river roar safely around you up to your neck, while you’re anchored by that stone, safe in relative stillness.

The pulse of the tumbling water becomes akin to hot tub jets, soothing sore muscles, relaxing tension of body and mind. The river gives a free massage, for as long as you care to accept it. On a scorching Saturday, several of us accept the offering. We are like river stones themselves, becoming slowly smoothed by the currents. The water is warm enough yet cool enough to be comfortable respite all afternoon. It’s idyllic.

Other people are more kinetic. I see teenage girls—wisely in life jackets—repeatedly climb up the riverbank beyond the rapids, then dive in to take the raging float downstream to calmer waters. Two fisherman scope out the currents before hiking up to near where the girls go in, then dive in also. Only their heads and hands are visible, fishing gear held aloft, aiming their downstream rush towards a rock jutting out of the river midstream. One grabs it on the way by, struggles but succeeds in anchoring himself on the rock, then climbs out. He barely grabs the other fisherman’s hand, who would otherwise be quickly carried past by the currents. After only a few minutes, they already have three fish on the line, dinner attained. They dive back into the currents and ride down to smoother waters, and out. Another family dives in and follows.

The rapidity of their travel amazes me. This river is much faster than it appears from the shore. Even the calm waters urgently race downstream. Only hours ago, the water that soothes me in this moment was many miles upstream. It passed through the forest fire currently raging there. Before that, it emerged from some source deep beneath the volcanic peaks. In fact, every ancient water molecule in the river has made journey after journey back to the sea, up into clouds, down through rain to the ground and then into the river again. Those molecules have stayed through ages of fire and ice, and temperate eras between. They are living yet essentially immortal.

As I relax into the water, I experience the river massage as being given to me by time itself, and by the spirit within it. Four billion planetary years are coded into the water that caresses me in the moment. Four billion years of water hosting the conditions for life, waiting for that life to come to exist on its own terms and time.

I’m reminded that there is no border between the river and those of us within and beside it. Not only does the water surround and soothe us, it’s within us. The water that forms the river also forms us. It’s the primary element of our own living, breathing currents. To be massaged by the river is to recall who we are and what we’re made of, in ancient, present, and future form. It’s a gift of remembrance.

May we all do justice to the spirit of the living rivers, as we return to their sacred waters. We’re all imperfect and ragged, and we may be worn from the heat. Yet we’re still alive enough to witness and celebrate the endless river of life’s caress. It’s never to be taken for granted.