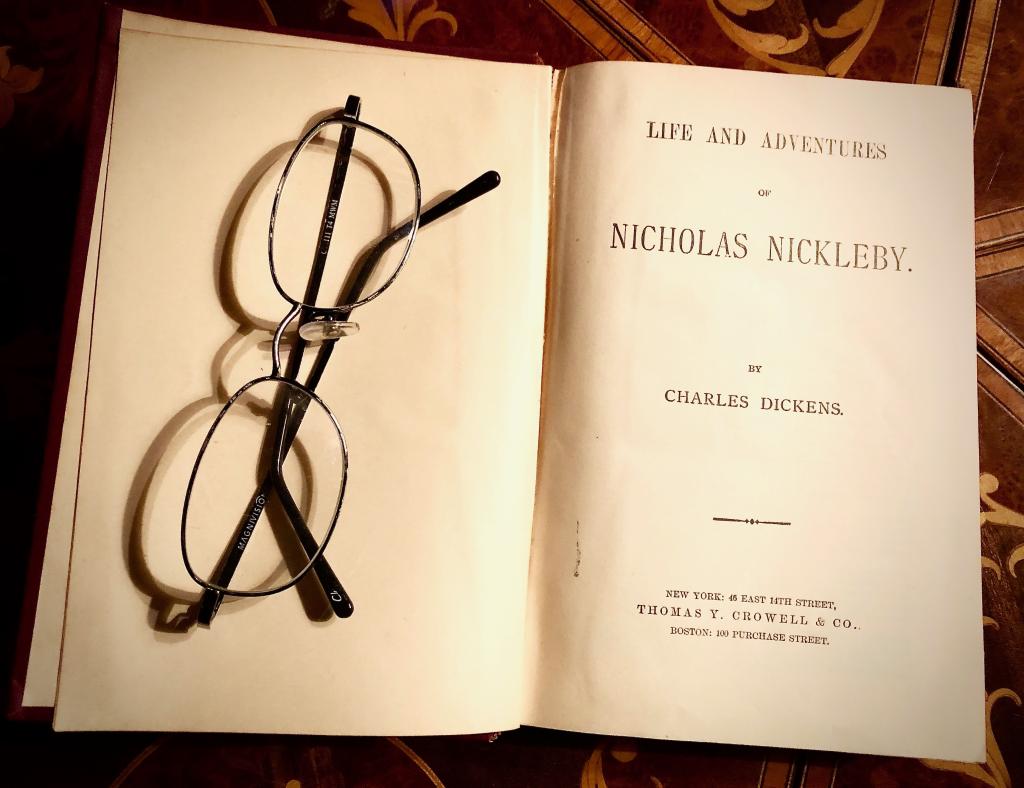 Charles Dickens sent me a letter recently. Not directly or personally, of course. He’s been gone  longer than I’ve been alive. Yet I marvel at how his words have crossed centuries. Some just ended up in my house, nearly two hundred years after he published them in 1838 and 1839.

I’ll never truly trace how Life and Adventures of Nicholas Nickleby ended up in my hands. It’s an edition published around the 1890s, when the book’s original text was already over half a century old. Somehow it made its way across the ages, until I bought it at a library sale in Oregon. Now, for a mere two dollars, I have over six hundred pages of tiny type in my hands, containing what an eloquent ancient Englishman observed, imagined, and penned.

Even if I never read the book, I love what it makes me think about: the miracle of print, which allows us to write to people who won’t be born for ages. If even one person two centuries hence spends a few dollars to buy one of my own books, I’ll be eternally thrilled.

I also love how an old book smells and feels. That’s a tactile form of storytelling, which even Dickens didn’t intend. It’s a tale of countless hands picking up the book, reading it, giving it away, finding it on a deceased relative’s shelf, who knows? Even if it’s only a tale of a century of shelf dust, that alone speaks volumes. Every copy of every book lives different stories, and this copy of Nickleby has 130 years of anonymous stories coded within it, beyond everything that Dickens wrote.

Digital words don’t accumulate stories and dust in the same sensory way. In the tiny electronic recesses where words like these reside, no hands touch them. They will never carry the musty, intriguing scent of a vintage bookstore.

I don’t take the unique miracle of books for granted, especially as people rely ever more on transient words on electronic devices, as newspapers disappear, as a new wave of book bans gains traction. We have to consciously celebrate the miracle of print, to keep it from vanishing.

That is one reason I still form my own words into books. I want individual copies to gather stories even as they tell one—such as one copy of my first book, Wild Grace: Nature as a Spiritual Path, which I gave to my father.  Fifteen years later, I reclaimed it after his passing. By then, its well-worn pages told the story of a healing between us; a healing my book helped us finally accomplish, as he read and reread it and shared it widely. He understood my path at last. I treasure the book’s healing story beyond measure.

Thus I pick up my copy of Dickens again, which is telling this story now in a time and place he never envisioned. I celebrate the interwoven miracles, then head off to a used bookstore to see what other stories I can find, which even a new book can’t yet contain.