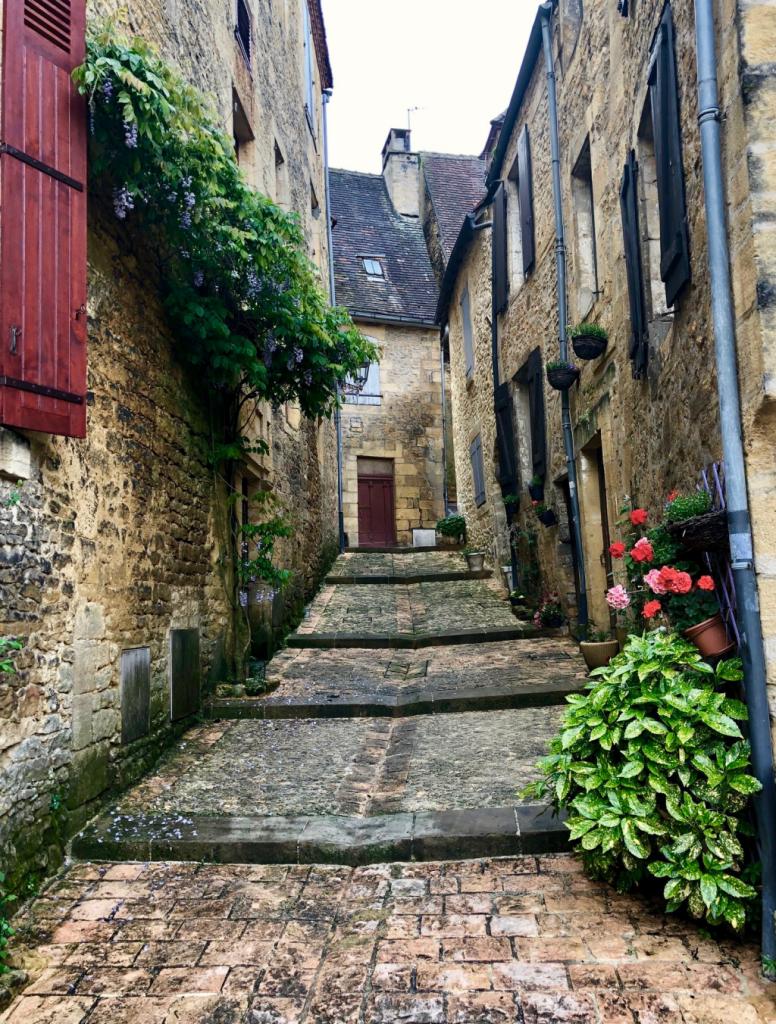 I waved goodbye to my friends and headed off, in search of the villa. After only 5 minutes of navigating the medieval streets of Orvieto (Italy), things weren't going well. I stopped, took a deep breath, stared at my map, then turned both it and myself to face a new direction. Just when I thought I was back on track, my right turn snaked left and then left again, leaving me far from where I should be. I grew increasingly frustrated as I bumped my suitcase over the cobblestones.

The longer I searched, the more defiant I became; I refused to turn around, to back-track, to lose covered ground. "Push on" I chided myself.

“But I am lost!” replied the internal wail.

Defeated, I called the villa owner and together we made our way, only four short blocks.

Later, sipping an awesome espresso, I reflected on my harried experience.

Had I really been “lost”?

That feeling that creeps up my spine when I can’t find my way may be more about my uneasiness with not predicting the next step than of not being able to find it. What might I have enjoyed if I had stopped insisting on the victimhood of lost and had instead leaned into the possibility of discovery, seeing the journey as it unfolded, trusting that the destination would eventually emerge? What if “lost" is a state of mind to be shifted, not a situation to be overcome?

The irony was that the purpose of this trip was to gift myself time: to explore, to pause, to discover - states I experienced less and less as I navigate the transition that comes in midlife. The change in identity and focus have left me with an unsettling sense of being in unfamiliar territory, unsure of my next step.

I once easily navigated from one challenge to the next. I knew my purpose, how my family needed me, what goals to set at work, who to mentor and what success to celebrate. My weeks had a rhythm, my friendships had a context. Then, as I entered mid-life, things started to shift. Surprised to discover that I no longer wanted the same things, I have felt unsettled and more than once a little turned around as I rescript my dreams, desires and destination.

That’s how I come to find myself reflecting on my frenzied cobblestone sprints. So focused on my narrative of being lost, I missed the gifts of the old Italian cobbled streets. It makes me wonder what I might be missing right now; so keen to clarify what I am going to do next, I am wallowing in the fact that I don’t know where my next stop is instead of relishing the curiosity that can only come when you are untethered, and a little directionless.

Three attempts at the medieval streets brought me to the same little flower-filled square with an inviting bench, a historic statue and a gurgling fountain. The signposts that I kept missing were the ones inviting me to be present, to be comfortable in discovery and in the unknown. Perhaps the greatest reset of midlife is rebranding this feeling of being “lost” and in transition from one of being off track to one of being on an adventure.

Tania Carriere, epiphany designer, leadership coach and founder of Advivum Journeys, hosts wondrous retreats for those interested in seeing new possibility in their lives. She is a keen student of the life lessons we learn as we travel and discover with intention. Join her in England or France this June or September.  www.advivumjourneys.ca

I so appreciated this article. I benefited in looking at a few things in my life differently now, thanks to reading this article. Rarely on FB and saw DeWitt's post. Lovely, inspiring perspective! Thank you for sharing and enriching my life!! Love, Morgine

Oh how I love it that you always encourage us to look deep within and connect with your powerfully insightful life-lessons through your daily jaunts through life, Tania.  As I am much deeper into my golden years, I so wish I had found my zest for adventure many years ago.  The one thing that really stood out to me was how your suitcase/"baggage" felt uncomfortable as it was pulled over the cobblestones.  So often, especially as parents, we never fully discard our "baggage" and feel the total freedom of the ease of being "untethered"!  I am slowly working on that and look forward to the "joy of being lost" in the coming years.  Many thanks, Tania!!